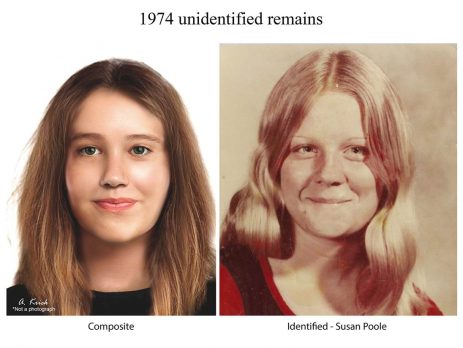 Skeletal remains were discovered, in June of 1974, in an area known as burnt bridges on A1A.  The investigation revealed the remains were of a young white female, approximately 15-20 years of age.  At the time of discovery, DNA was obtained from the remains and entered into the National Data Base for unidentified persons.

In November 2021, genealogy was performed on the remains, by scientists working for Othram Lab, resulting in the victim’s identification.  The victim, 15 year old Susan Poole missing from Broward County, is believed to have disappeared just before Christmas in 1972.

Detectives believe she may have been a victim of a serial killer and are seeking the public’s assistance with locating any friends to assist with developing leads to any possible suspect(s).

Susan’s mother is still alive and all we need is a lead. Who could have committed this heinous crime? Det. Springer is asking to speak to her friends: – Julie Hunt – Michelle Williamson – Greg Anderson These three could help us find the missing piece and give her family closure.