On August 5, 1997, Robert “Bobby” Goodman, left his home in Boca Raton after an argument.  He was last seen on August 3, 1997.  Family and friends looked for Goodman for two days before contacting the Sheriff’s Office to report him missing.  Goodman left on foot and has not been seen or heard from since.

At the time, Goodman was living in the 9300 block of Affirmed Lane, Boca Raton. At the time of his disappearance there was no indication of drug/alcohol dependency issues nor was he affiliated with any high-risk criminal activity.  Goodman was classified by family members as having a bad temper but no other issues.

Currently, the whereabouts of Robert “Bobby” Goodman is unknown.  He was 18 years old at the time of his disappearance (see photo on the left above).  An age progression image was crafted by PBSO Forensic Imaging Unit (see photo on the right above).

Anyone with information on Bobby Goodman’s whereabouts is urged to contact Crime Stoppers at 1-800-458-TIPS or you can remain ANONYMOUS by downloading our new app “PBSO” for your Apple or Android Smart Phone and using the “See Something” feature. The app can also be downloaded from www.pbsoapp.com. 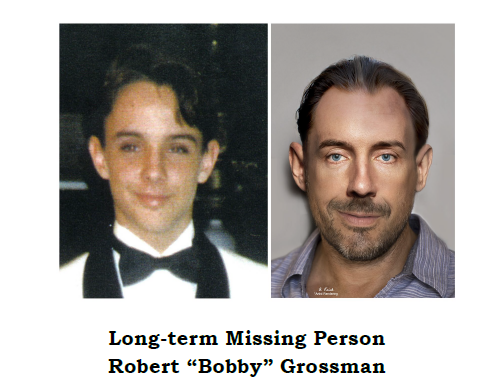