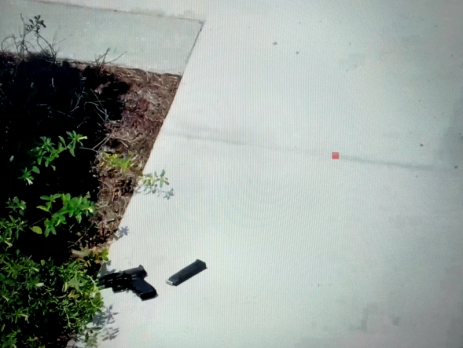 The sequence of events that occurred are as follows:

On Wednesday, at approximately 1:00 pm, deputies were serving a search warrant (lawful search warrant signed by Honorable Judge Keyser for Felony Criminal mischief over $ 1000), in the 5500 block of Fairway Park Drive, unincorporated Boynton Beach when for unknown reasons the subject fired at deputies striking one deputy, twice; once in the leg and once in the hand. Deputies on scene returned fire and retreated from the residence. Minutes later, one male, the suspect’s brother exited the residence then the suspect barricaded himself in the house.

The PBSO deputy was transported to a local hospital where he is being treated for his injuries.

Palm Beach County Sheriff’s Office SWAT team responded to the scene and negotiations began. Just before 4:00 pm, the suspect, Thomas Robarge, surrendered and he was taken into custody without incident.

Thomas Robarge, DOB: 6/19/60, is being charged with three (3) counts of Attempted First Degree Murder on a Law Enforcement Officer.

The suspects past Criminal History is: 1997, Arrested for Aggravated Assault without Intent to Kill – Abandoned/Dropped – NO CONVICTION and 2009, Misdemeanor – DUI conviction.

The PBSO injured deputy is a 6 year employee of the Sheriff’s Office. He is currently in stable condition.

Deputies who returned fire (two) are currently on administrative leave which is standard department protocol.