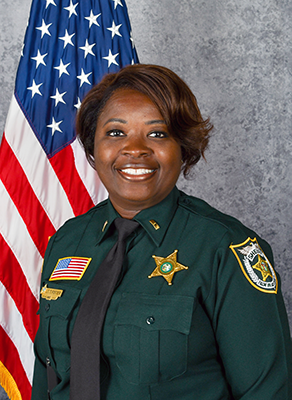 I am Lieutenant Tenicia J. Poitier; I am currently serving as the Executive Officer for the Corrections Support Services Division. I am a native of Florida; I was born and raised in Fort Pierce, a city just north of West Palm Beach. I have proudly served in the United States Army from 1990 to 1993 and continued to serve in the United States Army Reserves from 1993 to 1998. I have traveled both domestic and internationally while serving United States of America with assignments in Military Intelligence (MI) Units.

I pursued my academic studies by obtaining my Associate’s Degree in Criminal Justice in June 1988, from Indian River Community College, Fort Pierce, FL. I received my Bachelor’s Degree in Public Administration in December 2005, from Barry University, Miami, FL. In 2008, I was selected by the agency to attend the Graduate program at the University of Louisville: Southern Police Institute (SPI). In May 2008, I successfully completed SPI’s Police Executive Leadership Graduate Program and Administrative Officer’s Course, in Louisville, Kentucky. Determined in my academic pursuit, I completed my MBA in 2010, with a specialization in Financial Management from Northcentral University, Prescott Valley, AZ. With the mastery of knowledge in specialized fields, I was awarded certificate as a Certified Jail Manager with the American Jail Association in 2012. To conclude, my academic pursuit and career development, in 2016, I was certified as Force Science Analyst, subsequent to completing the Force Science Institute Certification Course in Chicago, IL. With all of the education, training, and experience afforded to me by this department, I am committed to ensuring the agency’s Corrections Division continues to be known for its innovation and best practices.