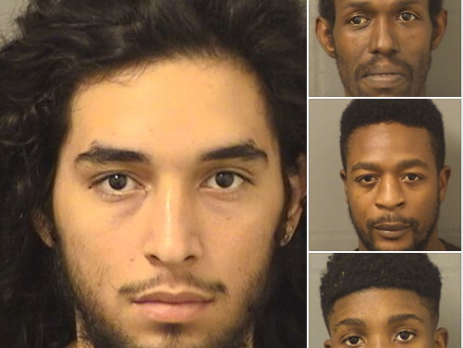 We have all seen the videos of people looting stores around the nation, but not many see what could be the consequences.

On Sunday, May 31, 2020, at around 11:30 pm, we responded to a Walmart in Forest Hill Blvd in reference to a large mob looting the store. The Walmart Asset Protection Manager explained that at around 11:00 pm, he saw an unknown white vehicle in the parking lot, but the store was closed at this time and he did not think anything of it. Shortly after, another vehicle drove by and shouted, “It’s about to go down on Facebook Live!”

Then, multiple cars pulled into the parking lot and a large passenger van backed up into the cement blocks that protect the front doors. At this time, he announced to all the remaining Walmart employees who were currently still at the store to lock themselves in an office.

The large group of people rushed through the front locked doors. One suspect used a pry bar to pry the front door open and another used a lug wrench to try and smash the front door window; both causing severe damage to the door. Once forcefully pried open, the crowd rushed into the store and looted the ladies’ apparel, jewelry, infant, shoes, bakery, and electronics departments.

The following suspects were observed by deputies looting and attempting to flee.

We also followed a Gray Toyota Corolla, from Walmart. The vehicle was occupied by several suspects. Four out of 5 occupants were apprehended without incident. The fifth passenger was later apprehended in Lake Worth.