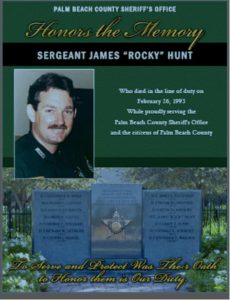 Sergeant Hunt was killed while attempting to stop an ATM robbery. After shooting, the suspect tried to commit suicide but survived. He was found guilty of Sergeant Hunt’s murder and sentenced to death. However, in June of 1998, the Florida Supreme Court commuted the death sentence to life in prison because the murder was not premeditated.

Sergeant Hunt is survived by his wife and two sons.