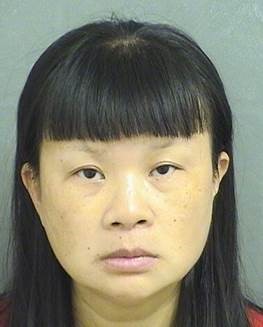 The Palm Beach County Sheriff’s Office Bomb Squad responded to St. Dak Buddhist Temple, located in the 6900 block of Donald Ross Road, unincorporated Palm Beach Gardens in reference to a possible firebombing.  Multiple items were found burning on the Temple’s grounds.  These items were determined to be improvised incendiary devices.

The temple’s video surveillance captured a female igniting and throwing a total of four firebombs over the gate onto the temple property. The female was also seen placing a fifth lit firebomb in a mailbox on the temple grounds.

The suspect was identified as Mei Cheung, DOB: 10/27/74 of Riviera Beach.  Mei was located, interviewed, arrested and is currently being booked into the Palm Beach County Jail to face charges of Firebombing.

The surveillance video is part of the ongoing investigation, therefore, will not be released at this time. In addition, detectives are conferring with the State Attorney Office on whether charges will be enhanced.