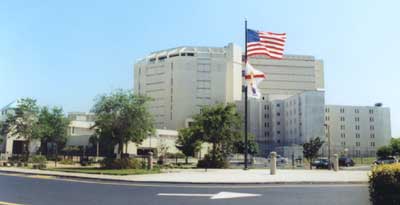 The Main Detention Center is located at the Sheriff’s Headquarters Complex on Gun Club Road in West Palm Beach, Florida. It has an area of 835,000 square feet and is situated on a 52.8-acre parcel of land. The South Tower, one of three adjacent buildings, is a twelve-story high-rise linear structure constructed from concrete and steel in 1993 at a cost of $52 million. Originally constructed in 1983 with a bed capacity of 838, the six stories East and West Towers flank the South Tower to complete the Main Detention Center.