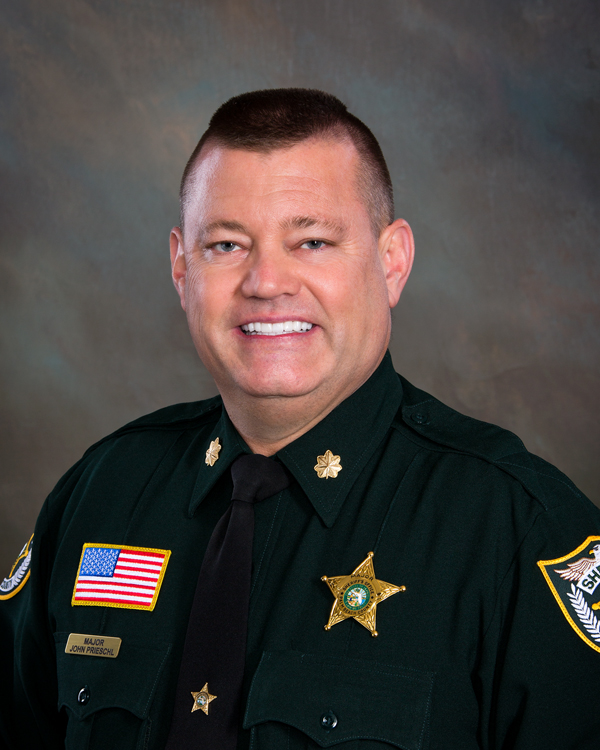 Major John L. Prieschl is a career law enforcement professional with approximately 30 years of local law enforcement experience.  He is responsible for overseeing the Professional Compliance Bureau, which is comprised of the Division of Internal Affairs, the Training Division, and Staff Inspections (policy/accreditation).

Major Prieschl was born and raised in West Palm Beach, Florida.  He began his law enforcement career in 1988 with the Jupiter Police Department.  He was hired by the Palm Beach County Sheriff’s Office in January of 1993.  His training and experience is diversified to include assignments in Vehicle Homicide Investigations, Training Division, Field Training Program, Internal Affairs, Court Services, and Patrol Operations.  He started promoting through the ranks in early 2000 and had the opportunity to command a Patrol District, the Training Division, and Internal Affairs before being promoted to the rank of Major in 2017.

Major Prieschl earned his B.A. Degree (Cum Laude) from Florida Atlantic University in 1999.  He graduated with his M.B.A. (honors) from FAU in 2002.  In 2010, he graduated from the Shepard Broad School of Law at Nova Southeastern University with his J.D., Dean’s List Honors.  He’s a Dean’s Scholar graduate of the 109th Administrative Officer’s Course at the Southern Police Institute through the School of Justice Administration at the University of Louisville.  He’s a graduate of the 13th Annual Florida Executive Development Seminar, offered through the F.B.I.  In addition, he’s a graduate of the 73rd Session of the Senior Management Institute for Police, offered through the Police Executive Research Forum.