In early 2005, Sheriff Ric Bradshaw established the Graffiti Eradication Program. Essentially, the program is designed to respond rapidly to any report of graffiti within Palm Beach County provides no-cost graffiti removal for affected commercial, residential, and industrial properties. Graffiti is either pressure cleaned or painted over by deputy-supervised inmates.

PBSO cares about our neighborhoods and businesses, which is why we want to keep our streets clean. The more graffiti there is, the louder the message spread that “nobody cares”. Extensive research confirms that disorder and disobedience grows where rules are openly flouted, a phenomenon called “The Broken Window theory, which says that broken windows or disorder will lead to more disorder and degrading of neighborhoods and businesses. Simply stated, people become more disobedient in environments plagued by litter and graffiti. Further, and of great importance, graffiti is often the first sign of gangs in the area, which will reduce visitors and patrons to businesses located there.

A community’s first step in taking back its streets is getting rid of graffiti immediately. The quicker we can identify and remove graffiti, the less likely there will be a recurrence. This power struggle cannot be won overnight, but persistent communities and businesses working in partnership with law enforcement almost always emerge as victors.

If you see graffiti, (with or without suspect information) along roadways, on utility poles and boxes, traffic signs, in business plazas, in or around perimeter walls, or on abandoned businesses and homes, there are four ways to report it:

The Graffiti Eradication Unit removes graffiti only from the unincorporated areas of Palm Beach County and District 14 (City of Lake Worth).  This is a free service.  The unit does not remove graffiti from within gated communities. 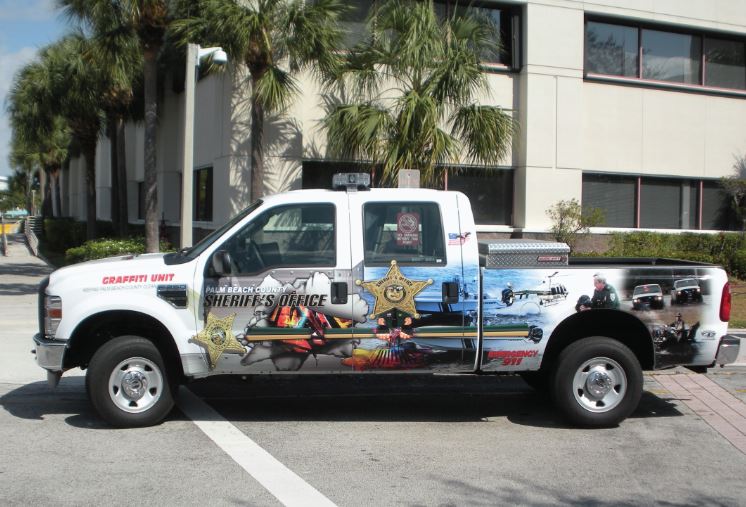