Deputies responded to a drowning in the 600 block of NE 2nd Street, Belle Glade. Upon arrival, deputies located one two-year-old and one three-year-old floating in a nearby pool.  Both boys were transported to a local hospital where they were pronounced dead upon arrival.

Detectives arrived on scene and learned that the boys were being watched by their grandmother.  The boys were playing in the back screened in patio, in the back yard, when the grandmother noticed they were no longer there and began to search for them.  After searching for around 30 minutes, she notified the Palm Beach County Sheriff’s Office that the boys were missing.  Deputies arrived on scene and began to search.  Palm Beach County Sheriff’s Office aviation located the children in a neighbors pool.  The children were removed from the pool by deputies and CPR was immediately initiated.  Palm Beach County Fire Rescue transported both children to Lakeside Medical Center where they were both pronounced deceased.

The investigation is in the preliminary stages. 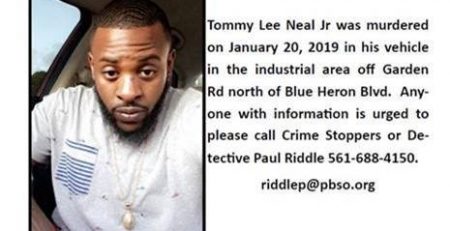 Three Years since the Homicide of Tommy Neal Jr

It’s been three years since the homicide of Tommy Lee Neal Jr.

The victim is a juvenile and not an adult male like previously reported.

Deputies responded to a shooting at 10th Ave North and Florida Mango Road.